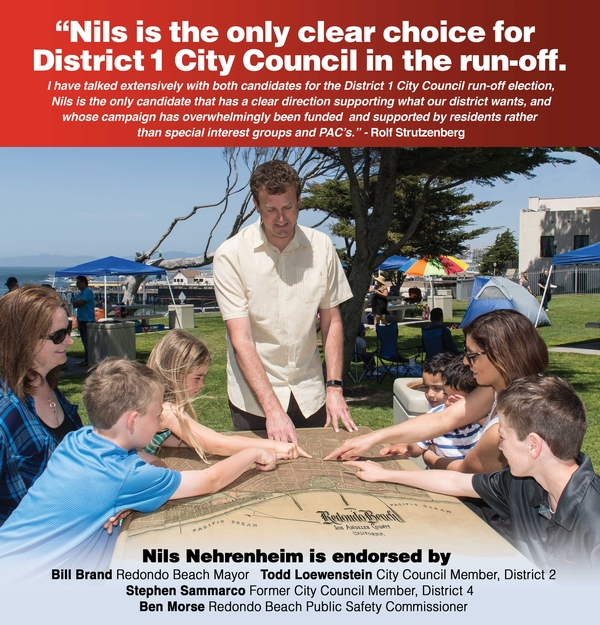 How does this finding affect the $14 Million CenterCal lawsuit against the City?  First, CenterCal does not have a permitted project for our harbor as the City approvals have been voided by the CCC ruling. While CenterCal has a signed agreement with the City, it’s a meaningless agreement.  The agreement wasn’t authorized by the City to make without CCC approval since the project falls within the Coastal Zone. My opponent cites that anyone can look at her voting record to question her position on the issues. Her voting record, the swing vote in this case, is exactly why we’re being sued for $14 Million.
My opponent voted:
·   To approve an unauthorized business agreement 35 days before voters overwhelmingly rejected the Waterfront project. CenterCal then sued the City for not honoring this agreement. I pleaded with the City Council many times, on the record, to wait until after the March election.
·   To approve a Waterfront project that an overwhelming number of residents said “NO” to, including myself. The community overwhelming voted YES to Measure C, rejecting the Waterfront project.
·   To approve a Boat launch ramp, called “inherently unsafe” by safety professionals in the harbor, including current and former Harbor Patrol and LA County Baywatch Lifeguard Boat Captains. I urged the City Council, on the record, not to approve the unsafe boat ramp.
·   To reject campaign finance reform, twice. As of today, special-interest groups from inside and outside the City have funneled more than $42,920 to her campaign. $5,000 of this is from CenterCal, who is suing the City for $14 Million. That’s right, my opponent is accepting campaign donations from a developer suing our City.  Twice, I asked the City Council, on the record, to approve campaign finance reform.
·   To approve the buyout of a $9 Million harbor lease, seven years early, for land that we already own. I implored the City Council, on the record, not to spend the money.
So far, this City has spent $36 Million in cash, loans and interest to buyout leases early in the Harbor. $56 Million is what our City would need to spend to get this “Public-Private Partnership” with CenterCal working, hardly “no cost to the taxpayers” as touted by CenterCal and their ardent supporters who include my opponent!

We need a new direction, a direction that supports the majority of the residents, not developers and special interest groups. I remain humbled to be endorsed by LA County Supervisor Janice Hahn, Mayor Bill Brand, Council Member Todd Loewenstein, former District 1 Candidate Rolf Strutzenberg, and hundreds of Redondo Beach citizens. Every vote I receive is an honor, and with our vote coupled with an outpouring of tremendous support, my vision is achievable.  Thank you!